We shred myths about women at work!

The stories we tell ourselves, our own beliefs and the narratives circulating in society make up the famous ‘glass ceiling’ that women often find limiting. What can you do about it? Search for solutions together, sift through the facts and find new role models. These are important results of the workshop “Diversity at Work: Myths vs. Reality “organized by P&G together with the LEAD Network and SZ PlanW in Frankfurt. However the decisive result of the evening was this: A diverse working world is better because living diversity leads to better results – and men play an important role in that as well.

Almost 90 women and men came to the Palmengarten Guest House in Frankfurt on Wednesday, 22nd August, to work on solutions for breaking the corporate glass ceiling and innovative approaches to tackle misconceptions in society. The workshop focused on seven myths about women in the professional world, including “Women do not have self-confidence”, “Women do not want to make a career” and “There are too few qualified women anyway”. The stated goal of workshop: identify areas of action for creating better career opportunities for women.

Areas for action to increase diversity in companies

“Women enrich teams and make companies more successful. We know that because we live diversity at P&G,” said Gabriele Hässig, Managing Director Communications and Sustainability at Procter & Gamble, at the opening of the workshop. It is important to question what is still preventing women from making a career today. In a “World Café” format, the almost 90 participants discussed seven myths about women in the work world.

“Promoting women is certainly an element to create more diversity in companies, but that alone is not enough,” said Astrid Teckentrup, Vice President of Sales at Procter & Gamble for Germany, Austria and Switzerland. “P&G also includes men and offers special training to empower leaders to equally empower women and men.” Women also need to support each other, especially women in leadership roles. “We need more role models that inspire young women because they show new ways,” Teckentrup continued.

That’s exactly what happened in the following two hours. By the end of the evening important fields of action were identified.

“We can all take away with us some actions from this workshop,” said Gabriele Hässig at the end of the session. Together, businesses and individuals must contribute to creating a climate of appreciation and provide clear and transparent rules on promotions – for women and men. Female executives are encouraged to talk more about their own stories so that younger women have the opportunity to learn from role models. Women would at the same time improve their own storytelling skills.

Companies and women on their own will not be successful, many participants believe. Focusing on the promotion of girls must start at school. This applies in particular to the so-called STEM (Science, Technology, Engineering, and Math) professions, referring to technical and scientific careers. The LEAD Network, which campaigns for gender equality in the consumer goods industry, has taken on the task of gathering facts about women and careers through its Gender Diversity Scorecard. Because it takes facts to counter myths.

The results of the discussions in detail

“What are tough decisions? And tough decisions are always good decisions”, said Astrid Teckentrup, Vice President Sales, Germany, Austria & Switzerland at Procter & Gamble. From the discussion at her table, the point emerged that there were differences between men and women; some participants said men often decide faster, while women offer a more sustainable decision making process.

Myth 2: Women are themselves to blame. How does diversity benefit men anyway?

“Men benefit when women make a career” concluded the participants in the discussion led by table moderator Jochen Brenner, HR Director at P&G. Men would have the opportunity to reflect on the meaning of their own role within the family, for example if they were no longer the main breadwinner of the family, one of the biggest gains would be more time with the children, and maybe a happier relationship.

It became clear in the discussion, however, that tackling the obstacles for gender parity can become exhausting. Businesses should therefore create a framework within which women and men could better understand each other.

From the data, it is clear that this myth is not accurate. Isabelle Kürschner, Consultant at Catalyst, led the discussion at her table. There is a perceived reality that women allegedly get promoted over a man just because of her gender.

Countermeasures have to be taken to demonstrate transparency and measurability in the promotion processes. It must also be made clear that a promotion has been made based on a decision made by a diverse team of both women and men. It is important to develop gender-neutral programmes wherein everyone finds themselves.

“We do not know if women are less confident because we cannot look into their minds,” said table presenter Insa Klasing, CEO of TheNextWe. “We observe that women often behave differently.” For example, women estimate they will generate less revenue than men when they launch a start-up. That is neither good nor bad, because in the end, what is important is that the planning is realistic – be it either the ambitious aim of a man, and in another case, the restrained outlook of a woman.

Therefore, it should not be about “making women fit for a man’s world”, Klasing said. It is crucial to live diversity and to create the conditions for such a framework in companies. This applies to diversity of the sexes as well as diversity of age and cultural background.

Myth 5: Women and technology do not fit together.

“The participants had quickly disproved this myth”, said Carsten Matthäus, Member of the Executive Committee of SZ Scala. There are many examples – including women in IT among the participants in the discussion group – which proved the opposite is true. However, it also became clear that there are barriers that prevent women from studying technical or scientific disciplines – even at school.

At times teachers and parents themselves do not encourage girls to study mathematics and science. Lacking exposure to these disciplines means women may not be drawn to ​​studying physics or computer science later on once at the University. This is why programmes are needed at schools to spark girls’ interest in STEM subjects at an early age. Parents also need to be made aware of this. Companies have few opportunities to advance women in these disciplines if support specifically targeted to young girls does not start early in life.

Myth 6: Women do not want to have a career.

“More and more women and men want both work and family”, said Virginia Bastian, HR Group Director at Nestlé. For this to work, a social discussion is needed, which also includes the role of fathers. Companies have to do their part and redefine the concept of a career. Careers should not mean working between the ages of 30 and 45, 80 hours a week.

However, women should also contribute to the solution by tackling these issues and enhancing their own “self-marketing”, said Bastian. Last but not least, one the most important life decisions a person will make is her or his choice of partner. Strong partners support each other in their careers and it is helpful if both meet eye to eye from outset.

Myth 7: There are not enough qualified women.

“We agreed in all discussions: There are enough qualified women,” said table presenter Veronika Pountcheva, Senior Vice President Corporate Responsibility at METRO AG. However, it is unfortunately true that we do not see enough of these qualified women. Women seldom talk about their achievements. Also, many are not as well-versed networkers as men and thus have fewer opportunities to network and get the exposure they need.

Corporations could provide targeted support to women by offering neutral diagnostics to better understand and assess women and men, as well as people with different backgrounds, said Pountcheva. In the discussion, however, it was also clear that the women have to do something for each other: support each other. 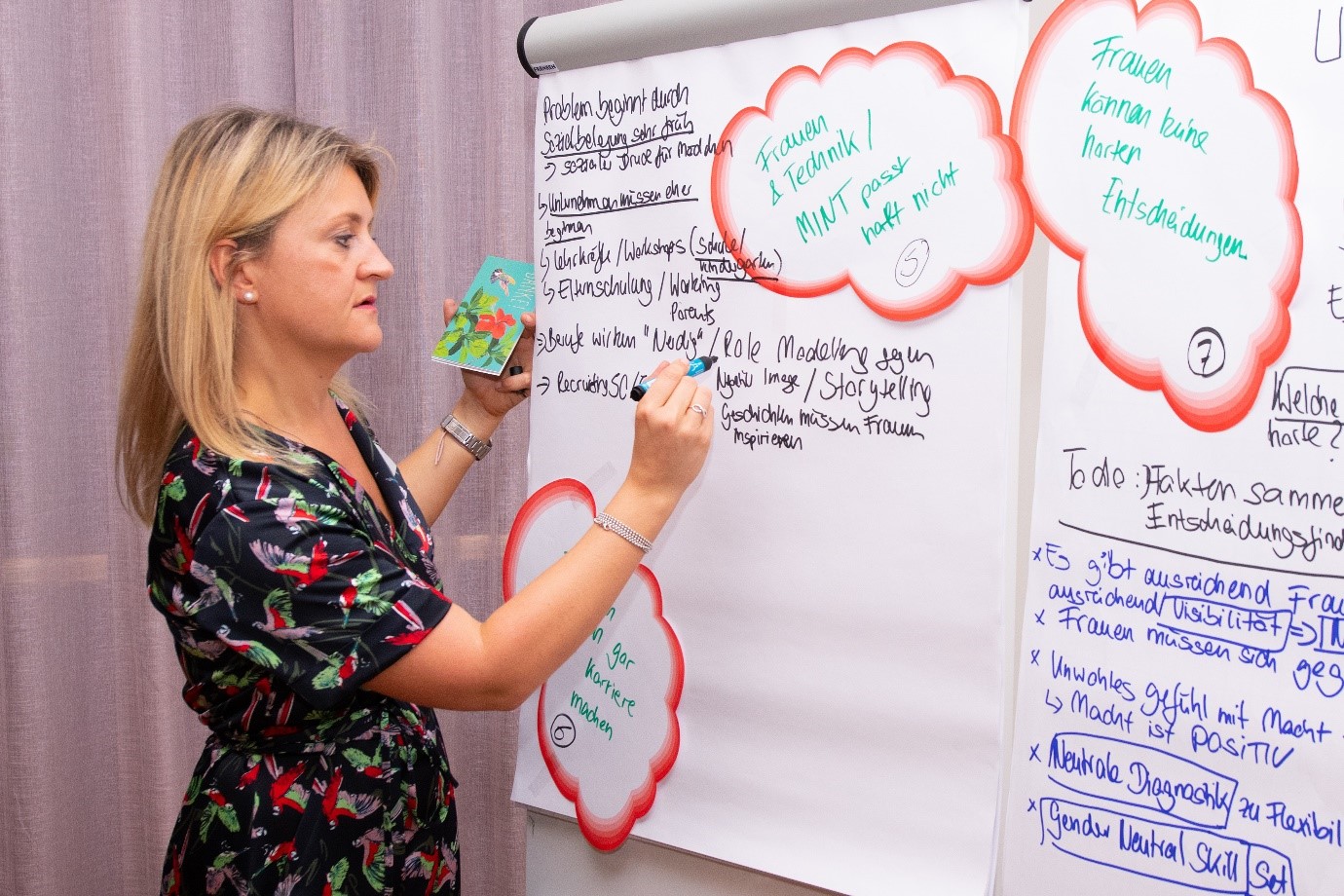 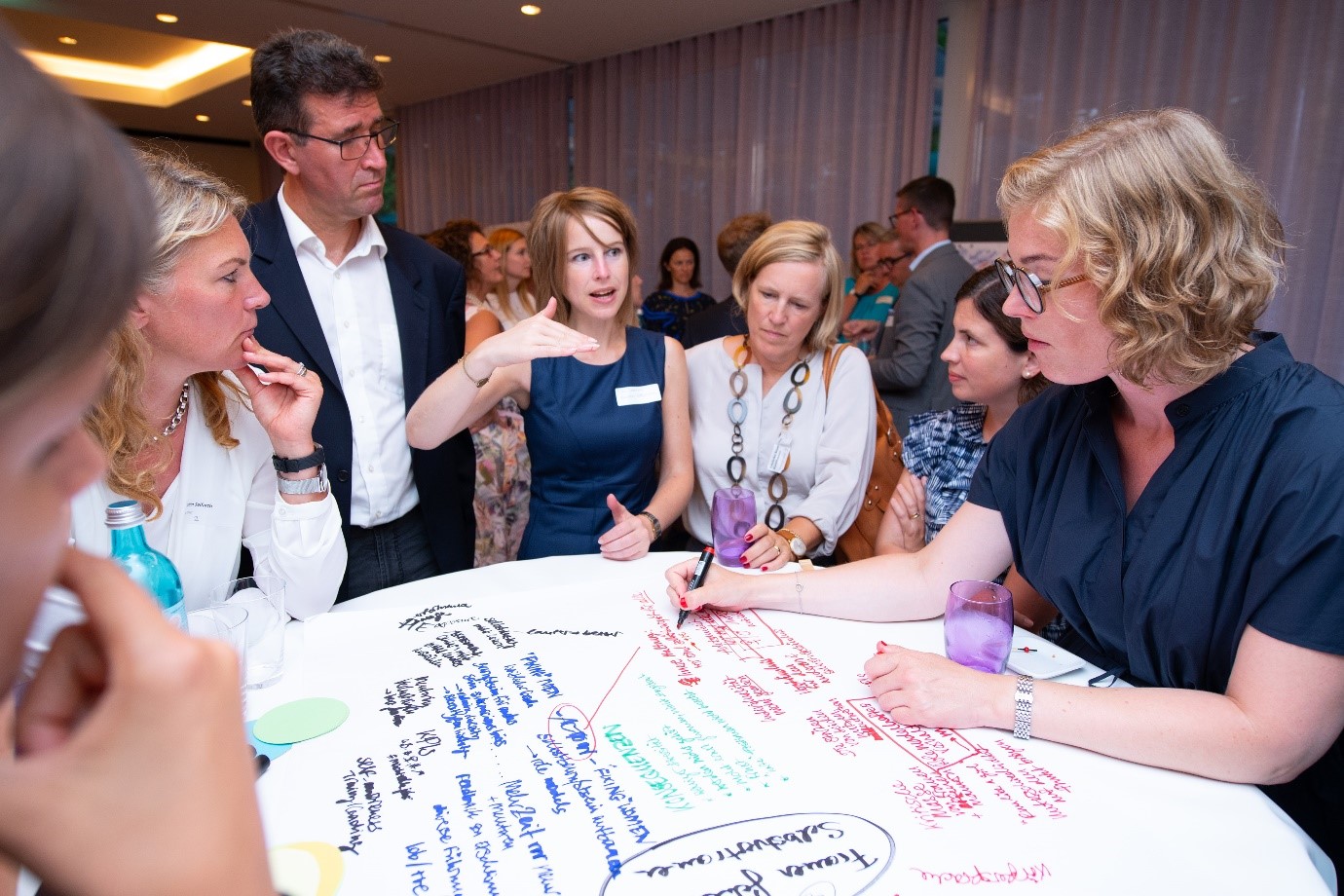 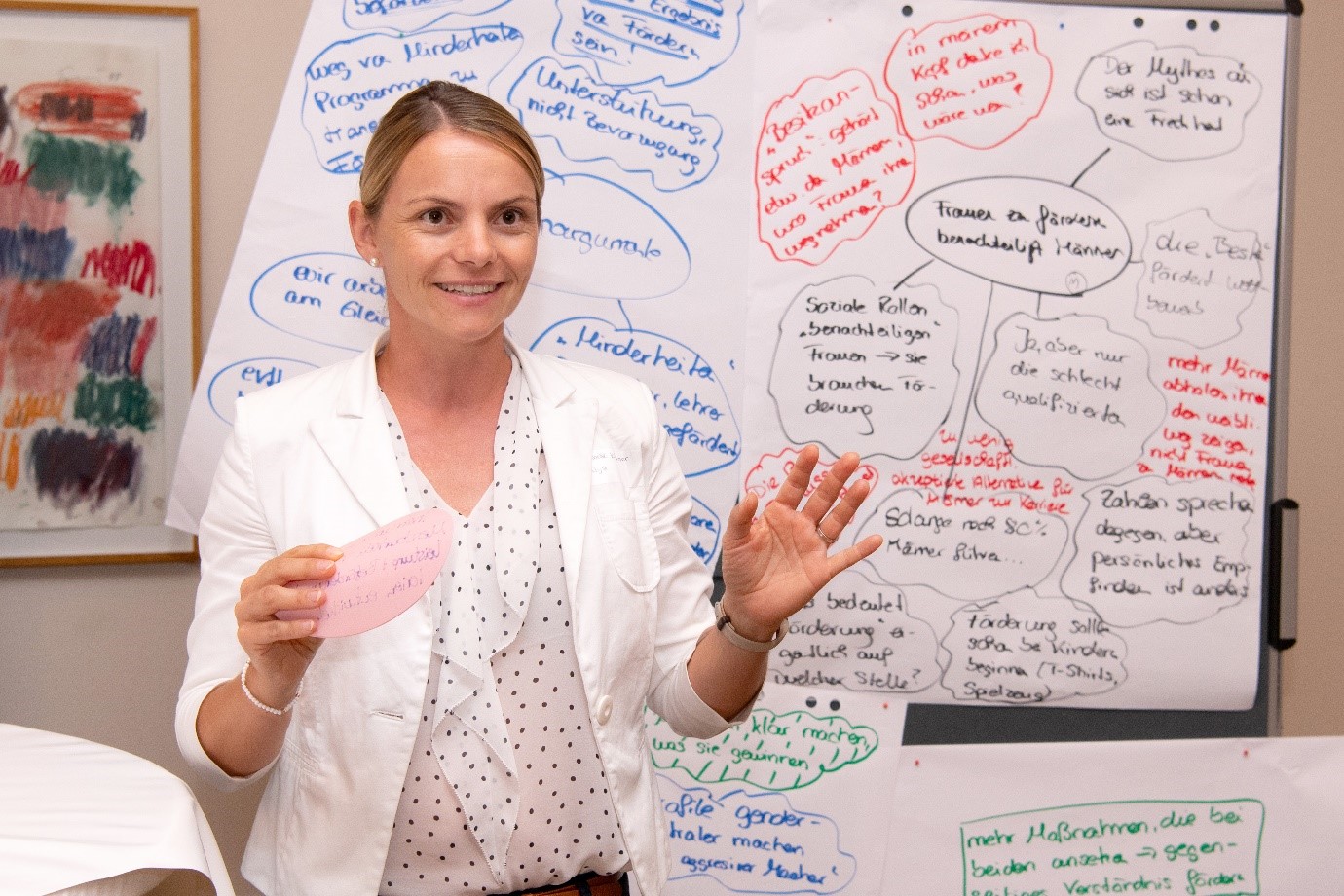