At LEAD Network we believe that ‘you get what you measure’, and so in 2017 we launched the first edition of our Gender Diversity Scorecard. The Scorecard was the first of its kind specific to the Consumer Goods & Retail industry, measuring and benchmarking the advancement of women holding executive positions in the consumer goods and retail sectors in Europe. 30 European companies participated, providing data that until then had been lacking for our sector. On average, LEAD Network found that women hold 25% of executive positions in the participating companies, exceeding the global average of 16%.

At the time LEAD Network decided to repeat the study every two years, and in 2019 32 companies (16 of whom also participated in 2017) participated in our Gender Diversity Scorecard survey. In an encouraging sign that the industry is making progress towards gender parity, of the companies that participated, the proportion of women in executive positions with responsibilities in Europe rose from 25% in 2017 to 34% in 2019¹. 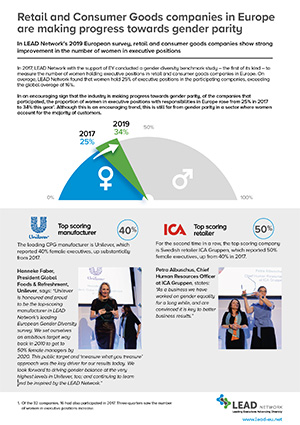 The leading CPG manufacturer is Unilever, which reported 40% female executives, up substantially from 2017. 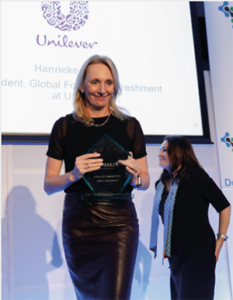 Hanneke Faber, President Global Foods & Refreshment, Unilever, says: “Unilever is honoured and proud to be the top-scoring manufacturer in LEAD Network’s leading European Gender Diversity survey. We set ourselves an ambitious target way back in 2010 to get to 50% female managers by 2020. This public target and ‘measure what you treasure’ approach was the key driver for our results today. We look forward to driving gender balance at the very highest levels in Unilever, too; and continuing to learn
and be inspired by the LEAD Network.”

For the second time in a row, the top scoring company is Swedish retailer ICA Gruppen, which reported 50% female executives, up from 40% in 2017. 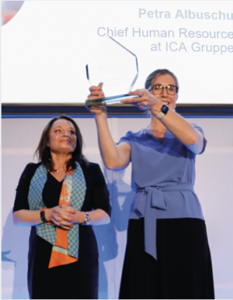 Petra Albuschus, Chief Human Resources Officer at ICA Gruppen, states: “We are incredibly proud that ICA has emerged as the top-scoring retail company for the second time in a row. As a business we have worked on gender equality for a long while, and are convinced it is key to better business results.”

Each of the 32 participating companies received a personalised copy of their results, gaining valuable insights on where they stand compared to industry standards.

LEAD Network intends to repeat this study every two years, in order to chart our industry’s progress. Over the course of the next two years, we will aim to share best practice examples from our top-scoring companies, which can be used to shape diversity policies and initiatives to ensure our industry becomes the industry of choice for female candidates. This research will also help LEAD Network Partners to develop a roadmap and action plan to advance female leadership within their own organisations.

1.  Of the 32 companies, 16 had also participated in 2017. Three-quarters saw the number of women in executive positions increase.