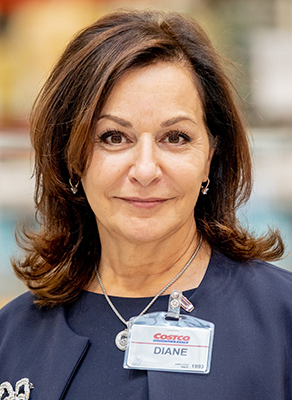 There’s no such thing as perfection

Women should be prepared to try something new even when they don’t entirely know 100% of the new job function, believes LEAD advisory board member Diane Tucci.

During her 23-year career at Costco Wholesale, Diane has found that men are far more willing to go out on a limb.

“Women always wait until they are 100% confident to try something – men just figure out the basics before jumping in and work out the rest later,” she says. “Women need to take risks.”

In a man’s world
Diane joined Costco in 1993, performing a variety of roles from warehouse management to purchasing before being appointed VP operations for Canada.

In 2012 she was asked to open the first Costco Warehouse in Spain, before leading further development across Europe. She is currently VP country manager Spain – the firm’s only female country manager.

At the start of the meeting the candidates ignored her during the introductions and exchange of business cards. “Once they realised I was the boss, there were several excuses and I actually got a handshake and observed many red faces,” she says.

But having the courage of her convictions paid off, as ultimately she was reoffered these opportunities – an outcome that increased both her personal and professional fulfilment.

It wasn’t always plain sailing though. She cites one instance, in 1993, when she was working for her previous company.

A position came up that she really wanted, but her boss decided – without consulting her – that as a mother of twins, she would not be returning to work.

He could not have been more wrong, and as a result Diane decided to leave the company after 19 years of service.

Helping others
Since 2009 Diane has been involved in Journeys, a Costco initiative providing career development, education, mentoring and support for women.

She also believes it is vital to collaborate with male colleagues, many of whom face similar issues.

“Let’s not forget that there are lot of single parents out there, irrespective of whether they are male or female,” she says. “They all have career aspirations as well as juggling their personal commitments.”

Be transparent and genuine – people can detect a fake
•
Be kind to yourself. There’s no such thing as perfection
•
Respect your team. No matter what your opinions or perception, never make a decision on someone else’s behalf
•