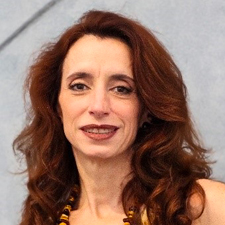 I believe one of the most defining aspects of my life has been the multicultural background. I was born in Germany, raised in Mexico City, mother Mexican, father German and later I married a French man. Growing up in these two very different worlds – the Latin-American and the European – united aspects that would often appear contradictory, even to exclude one another. Uniting apparent opposites became recurrent. Since early childhood I believed I would become a mother and have a career, which seamed contradictory for many in my environment then. When choosing my career path, Arts and Business were both equally appealing to me. Thus, I have a double MA degree in Literature and Business Administration.

Professionally, my focus has been predominantly in Consumer Retail, going through various areas from Marketing, Communication and PR in early years to specializing in Supply Chain and Logistics. Today, I am a global sales executive, expert in Supply Chain, responsible to grow and strengthen the Vertical Consumer Retail in EMEA for Schenker. Not to give up on the arts, I am an actress in a theatre group.

When I met LEAD Network and attended the Yearly Event in 2015 for the first time, I was amazed by all the female power gathered at this organisation and – not to forget – the males that supported this. It felt like coming home. I am not alone anymore. Teaming up with business partners and bringing in key stakeholders of the industry generates an immense value for individuals and their companies. This is one of the best ways to advance female leadership.

What would you say is one of the most adventurous or riskiest moves you’ve made professionally?

Getting pregnant was surely the biggest challenge for my career. Nobody doubted that I could accomplish my role and targets – until I got pregnant. At the time, women in Germany would stop working or work in part time after three years of absence – in the best of the cases. I had to prove that nothing had changed in regards of performance and career aspirations. I was convincing. The next time I got pregnant, nobody questioned, whether I would come back.

Is there one person you could attribute a big piece of your success to?

There are several, indeed. Starting by my mother, a sort of pioneer in gender equality. My father, teaching me to never give up. The German School in Mexico putting me on the path of delivery and performance.

When shaping my career in Supply Chain and Logistics, I was lucky to have as a boss a very experienced senior manager, with an excellent network, deep understanding of the industry and a huge business acumen. Although a rather conservative man, he sought to be challenged and pushed beyond his boundaries, to think out of the box. Which I continuously did.

Going ahead, I joined forces with an experienced senior engineer with vast operational expertise, allowing me to grow my technical knowledge and promoting me to a senior position to manage one of our largest retail accounts globally.

If you could back in time, and give your 20-year old self a piece of advice, what would that be?

Accept help and guidance from others, do not fight alone.