Andy Williams memorably declared Christmas the most wonderful time of the year back in 1963, but I find that most years peak much earlier. International Women’s Day falls on March 8th, and it’s always a highlight for me. It’s hardly a secret to long-term readers of this blog that I feel strongly about diversity and equality and that women should be channelling our energy into building each other up as much as possible. With 2022’s IWD revolving around a theme of “break the bias“, that seems more important than ever.

Bias, whether we like to admit it or not, is all around. Sadly, 90% of the global population – male and female alike – still hold some degree of bias against women, whether conscious or unconscious. Even within the first world, expectations of how women should look, think, and feel remain in force. 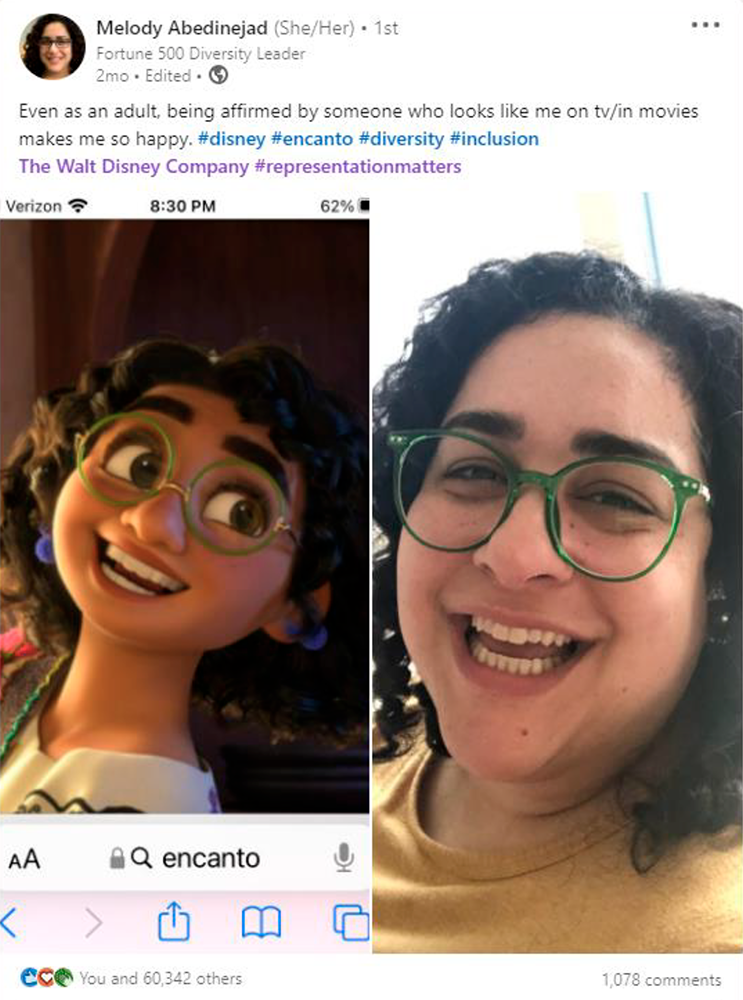 I experienced this myself to an extent a couple of years ago, when I openly discussed how I enjoyed watching the Disney movie Frozen with my children, holding it up as a good example. Some people would roll their eyes and ask how I could tolerate such rubbish (and I’ll admit, I’m as sick of Let it Go as the next parent!), claiming that such films are mind-rotting rubbish that set a dangerous example to young girls.

I disagree. My belief was – and remains – that it’s never a bad thing for children to be introduced to strong-willed heroines that tackle and resolve their own problems, rather than sighing heavily and waiting for a man to take charge of a situation.

Now, this may sound like a very outdated argument. Frozen is almost a decade old now, after all. In addition, I’m pretty sure Disney is doing OK as a business model. There are worthier causes to defend and campaign for this IWD. I did have to catch myself when considering my defence of the movie, though. Was I showing a subconscious bias of my own?

I considered the character of Elsa to be a relatable role model for girls everywhere. In reality, does that apply to young women and girls who are not Caucasian? Who do not speak with clipped “queen’s English” tones? Who do not have a waist that puts the eye of a needle to shame? It’s a big world out there, and it seems that there’s still room for more representation – and less bias.

This was brought into sharp relief by … well, I’m going to be honest, by watching another Disney movie. I rarely watch TV, relying on my husband to fill me in on the latest and greatest entertainment. However, these films are a great way to spend time with my kids – especially with the global pandemic still casting a long shadow. We all sat down to watch Encanto together and loved it.

If you’re unfamiliar with the story of Encanto, it revolves around Mirabel – a young Colombian girl born into a magical family that lacks special powers of her own. My children seemed fascinated by the bright colours and catchy songs. The film has awoken a new interest in Latinx culture within my family, which I am thrilled to encourage. I was also drawn to how the movie addressed themes of complexity within family and societal dynamics, though – about how important it is to feel seen for who we are, not the image that we choose to present to the outside world. A scene where Mirabel claims, “I will never be good enough for you … no matter how hard I try”, struck a real chord with me, as I’m sure countless women in the workplace can relate to this – especially if they experience bias.

Now a quick word on diversity in the entertainment industry. Marvel Studios, owned by Disney, has recently been doing a fine job expanding their African American and Asian representation on-screen with characters such as Black Panther. Female characters are still a little short-changed, though, and the highly publicised legal battle with Scarlett Johansson left a sour taste in the mouth. Defending profit margins in the wake of the pandemic is one thing, but when we know how much they gleefully paid Robert Downey Jr, one could draw unsavoury conclusions about why Ms Johansson was treated in such a way. Fans of the franchises consider both performers to be equal. All the same, improvements are being made in terms of racial sensitivity. Steven Spielberg’s recent remake of West Side Story – produced by Fox, now a subsidiary of Disney – was praised for drawing primarily from a pool of Latinx performers.

That makes me so glad that Melody Abedinejad went viral with the social media post featured on the cover of this blog. Melody is one of many people that seek representation from an entertainment industry that has relied upon traditional western aesthetic values for so long. The sheer glee and joy that Melody emanated struck a chord with me, though. I was keen to learn more about Melody and was delighted that she agreed to discuss her story with me.

Melody is 39 years old and hails from Massachusetts. Melody’s family are of Iranian descent, having arrived in the USA in 1978. I’ll save you reaching for a calculator – that was before Melody was born! The Abedinejads left Iran hoping for a better life, planning to study in the USA. The political situation in Iran became increasingly fraught, and Melody’s parents decided not to return for the sake of their children’s safety. Melody grew up in Northeast America, born and raised an American girl, but she always felt a little different from her classmates and peers thanks to her appearance.

While most people could watch TV or movies and easily imagine themselves in the protagonist’s shoes, Melody could recall just three characters that she related to from her childhood. A dark-haired character from the soap opera Days of Our Lives, a side character from the teen drama My So-Called Life, and the lead of the comedy series Ugly Betty. Even though these characters sported darker hair and skin tone, Melody still struggled to feel seen. Like many young women, Melody was conditioned to question her weight and appearance throughout her childhood as she did not resemble the cover girls of Maxim magazine or Sports Illustrated.

This all changed when Melody’s phone rang one afternoon. Seeing the name of her best friend Jason on the screen, she thought nothing of it – she assumed he was just calling to say hello and catch up. As a result, it took her by surprise when he said, “I’m watching a movie, and the main character … it’s you.” Melody began watching Encanto, thinking that maybe she’d be met with a character that bore some vague resemblance to her – just enough similarities to raise a wry smile. Instead, I’ll let Melody explain what she felt.

“It’s true – she talks, acts, and looks like me. I got very emotional and excited to see someone that looks like me on TV. I have always struggled with my weight, and seeing someone close to looking like me makes me feel beautiful. To see myself as beautiful is, otherwise, a real struggle. I don’t cry that easily, and I never cry during movies, but I was crying from the opening scene. It didn’t matter that it was a cartoon.”

And neither should it! Animation, just as much as live action, has followed traditional beauty standards for years. Think back to your childhood, and you’ll likely remember being entranced by the likes of Snow White, Sleeping Beauty, Ariel the Little Mermaid and Belle from Beauty and the Beast. All of these have a very distinct appearance. Sure, we had Princess Jasmine in Aladdin in the early 1990s, but it must have remained disheartening for countless young girls to constantly have to battle to identify with the characters that were supposed to be their heroines. The message, it seemed, was that porcelain skin, 0% body fat and a regal manner were the only values that mattered.

Melody explained to me how she has struggled for respect in the workplace, thanks in no small part to her gender. She feels strongly that women need to stop apologising for who they are, something I agree with firmly. Naturally, though, Melody brings a new dimension to this. Being a woman of colour in a world that still shows such reluctance to level the playing field, it feels more important than ever for people like Melody to be represented in popular culture.

Now, we’re not saying that the CEOs of FTSE 500 companies around the world are going to watch Encanto, wipe a tear from their eye, and restructure their entire management teams. All those women want, whether that’s Melody, myself, or any other woman in the workplace, is to get a fair shake at earning our seat at the table. More importantly, we want to be seen in such positions. A photo of the Munich Security Conference, for example, has set social media ablaze. Take a cursory glance and you’ll see why.

Melody and I agree on something – that the representation we see in Encanto needs to be translated to the workplace too. Not just for our benefit, though seeing more women in global leadership positions will offer a great deal of hope and motivation. It will provide the belief that anything is possible and that hard work will pay off.

Perhaps more importantly, though, such representation will create a better world for our children. The girls and boys who sit down to watch Encanto, spend days humming We Don’t Talk About Bruno to themselves afterwards, ask their parents why there is no Luisa merchandise (something I also question!), and wonder why the adult world appears so colourless and plain in comparison. We have an opportunity to reduce subconscious and conscious bias in future generations, but that requires activism from today’s leaders.

With that in mind, I hope you’ll join me in striking the X pose of IWD 2022 and vow to do all you can to break the bias. Do what it takes to lift your female colleagues – especially those who are also minorities – and take another step forward in making this world a better, more equal place for everybody. Maybe start by taking to Twitter and starting a new campaign. Let’s help #MelodyMeetMirabel and get Melody to Disneyworld, showing that diversity truly makes a difference in the modern world!